Lloyd Kaufman on making your own damn movie 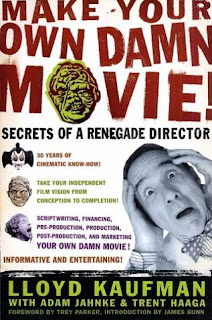 Asked for words of inspiration for DIY filmmakers at TMAYM, Troma Entertainment legend Lloyd Kaufman suggested we use a quote from one of his books, so here goes—from Make Your Own Damn Movie:

To make your own damn movie, you have to be equal parts dictator and diplomat. You must be both the visionary storyteller addressing the audience at the film festival and the dickhead shoveling rat shit out of the basement because nobody else would and everything would be lost if it didn't get done. You must be both extravagant artist and penny-pinching asshole. It isn't easy, it isn't always fun, and if you're looking to get rich quick by making the next Blair Witch Project then you'd might just as well stop right now. The odds are stacked heavily against you ever making a dime directly off your masterpiece.

So, knowing full well that the road you're about to embark on is long and painful, will probably require you to be publicly humiliated on more than one occasion, and will require your total obsessive attention for more than a year, is it worth doing? Absolutely. Writers know the satisfaction of completing a story. Musicians know the satisfaction of completing a song. But filmmakers know they've brought people together and created something bigger than any of them could have done individually. They have orchestrated an experience that no one involved will ever forget. They've created something that will have a life long after they're gone. They have made some art under circumstances that would send most people into therapy for the next five years.

FYI, this quote follows a rather vivid description of Lloyd having to clean a Troma storage room that was befouled by rat feces... as well as a rat carcass infested with spiders. Filmmaking is nothing if not glamorous.

Posted by Justin Fielding at 5:29 PM

Email ThisBlogThis!Share to TwitterShare to FacebookShare to Pinterest
Labels: resources

The origins of "Tell Me About Your Movie"